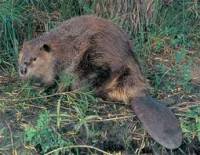 The North American beaver is the largest rodent in North America. It gets up to four feet long and can weigh over sixty pounds. This beaver has dark brown fur on its back and lighter brown fur on its belly. It has a flat almost hairless tail that it uses to maintain its balance when climbing trees, and slaps against the water to signal other beavers that there is danger or to warn predators. The beaver's fur is thick and is coated with an oily secretion that makes it waterproof. It also has a thick layer of fat under its skin to keep it warm under water.

This beaver can be found almost anywhere in the United States except for Florida. They live near rivers, streams, ponds, small lakes, and marshes. They build dams that are domed shaped. The dams have a large central chamber and usually two entrances.

Beavers mostly eat tree bark, but they also will eat roots, buds, and other water plants. They really like the bark of willow, maple, birch, aspen, cottonwood, beech, poplar, and alder trees.

Beavers live in colonies made up of a breeding male and female and their offspring. They mate for life. Gestation last for three months and then the female gives birth to a litter of kits. Both the male and the female will take care of the babies. The offspring will stay with their parents for two years.