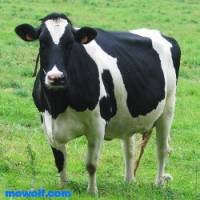 The cow, otherwise referred to as cattle, is raised for a variety of reasons such as beef and dairy products. A female cow that has not yet given birth and is younger than three years old is called a heifer.

Cows have one stomach with four compartments which allow it to digest hard to digest food like various types of grass. They also “chew the cud.” This means that they regurgitate or cough up their food, and chew it again.