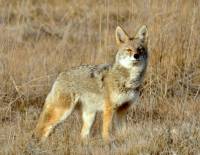 The coyote, a smaller cousin of the gray wolf, is widespread throughout North and Central America. They are known for being very capable at adapting to human environments which is why they are sometimes found in suburban areas. Despite their appearance and reputation, they are not generally dangerous to humans unless they are defending their young. Part of the reason they are good at adapting is because of their varied diet. Coyotes will eat anything from fish to deer which can be brought down with the help of their pack. They will even eat fruit or vegetation from time to time.

Coyotes are social creatures and will be part of a family or a temporary pack consisting of other coyotes that haven't mated yet. Once a male and female mate they stay together for life and will establish a territory and construct a den. While the female is pregnant the male will hunt and bring her back food. The pups once born are cared for by both parents until they are old enough to go off on their own. They may stay with the parents for long into their adult life till they find a mate.