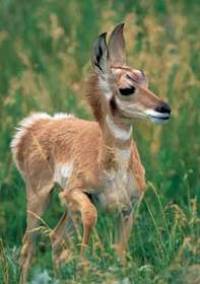 Pronghorns have distinct white fur on their rumps, sides, breasts, bellies, and across their throats. Adult males are 4 feet 3 inches – 4 feet 11 inches long from nose to tail, stand 32 – 41 inches high at the shoulder, and weigh 88–143 pounds. The females are the same height as males, but weigh 75–106 pounds. The feet have two hooves, with no dewclaws. Their body temperature is 100 °F.

Each “horn” of the pronghorn is composed of a slender, laterally flattened blade of bone that grows from the frontal bones of the skull, forming a permanent core. Males have a horn sheath about 4.9–16.9 inches (average 9.8 inches) long with a prong. Females have smaller horns that range from 1–6 inches (average 4.7 inches)

The pronghorn is the fastest land mammal in the Western Hemisphere, being built for maximum predator evasion through running. The top speed is very hard to measure accurately and varies between individuals; it can run 35 mph for 4 miles, 42 mph for 1 mile, and 55 mph for 0.5 mile. Compared to its body size, the pronghorn has a large windpipe, heart, and lungs to allow it to take in large amounts of air when running. Additionally, pronghorn hooves have two long, cushioned, pointed toes which help absorb shock when running at high speeds. They also have an extremely light bone structure and hollow hair. Pronghorns are built for speed, not for jumping.

Their range extends from southern Saskatchewan and Alberta in Canada south through the United States (southwestern Minnesota and central Texas west to coastal southern California) and northern California, to northern Mexico. They would not be seen in Minnesota. Pronghorns prefer open, expansive terrain at elevations varying between 3,000 and 5,900 feet, with the densest populations in areas receiving around 9.8–15.7 inches of rainfall per year. They eat a wide variety of plant foods, often including plants unpalatable or toxic to domestic livestock (sheep and cattle), though they also compete with them for food, usually forbs, shrubs, and grasses. Cougars, wolves, coyotes, and bobcats are their major predators. Golden eagles have been reported to prey on fawns and adults.

Pronghorns have a gestation period of 7–8 months, which is longer than is typical for North American ungulates. They breed in mid-September, and the doe carries her fawn until late May. This gestation period is around six weeks longer than that of the white-tailed deer. Females usually bear within a few days of each other. Twin fawns are common. Newborn pronghorns weigh 4.4–8.8 pounds. Sexual maturity is reached at 15 to 16 months, though males rarely breed until three years old. Their lifespan is typically up to 10 years, rarely 15 years.

The protection of habitat and hunting restrictions have allowed pronghorn numbers to recover to an estimated population between 500,000 and 1,000,000. Pronghorn migration corridors are threatened by habitat fragmentation and the blocking of traditional routes.